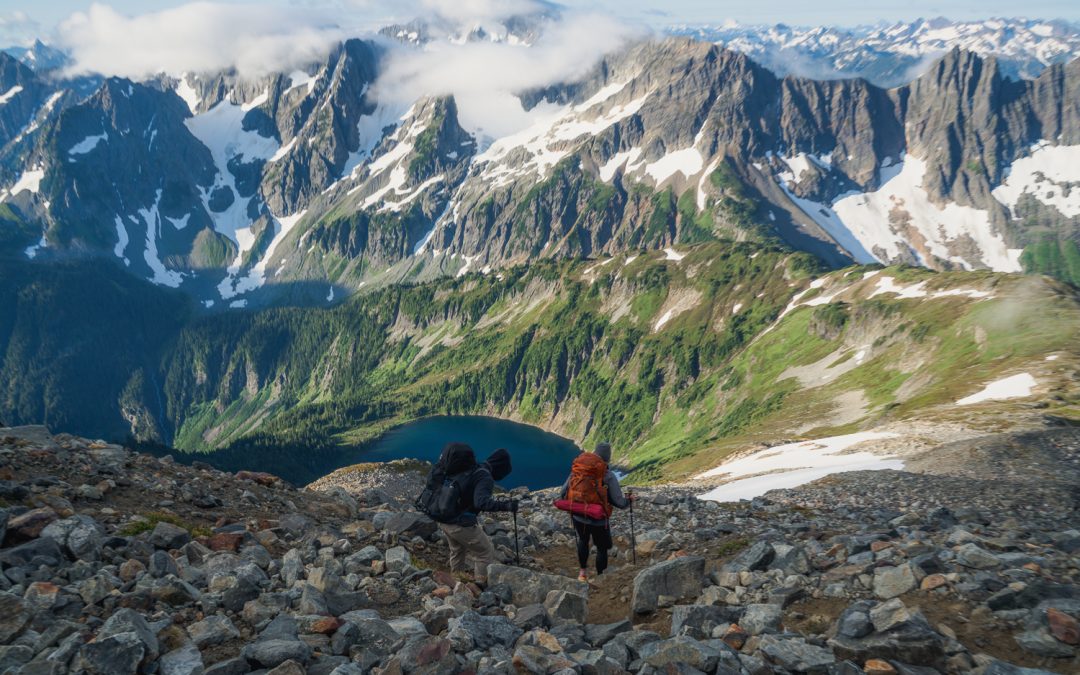 After this trip to the Pacific Northwest and visiting Washington’s 3 National Parks, I’m now excited to say I’ve visited half of the U.S. National Parks. And the North Cascades have definitely made my top 5 list. I don’t hear people talk about the North Cascades too much, which is probably because it’s inaccessible most of the year. Most of the backcountry backpacking trails are only open in August and September due to snow, unless you’re doing legit mountaineering.

Backpacking Sahale Glacier is an offshoot trail of the popular Cascade Pass Trail which is accessed from Cascade River Road. It is not a main road into the park, but still very popular nonetheless.  Cascade River Road turns to gravel at around the halfway point and is about 18 miles long. It  took us about an hour to get to the start of the trailhead after the turnoff from SR-20.

After we parked and finished packing our final items it was time to ascend! The first 2.5 miles of the trail has 35 (we counted) gradual switchbacks that knock out the first 1500 feet of elevation gain. There weren’t many views during this section because the the dense forest but I still enjoyed it.  Once we completed the final switchback, we started getting some epic mountain views. 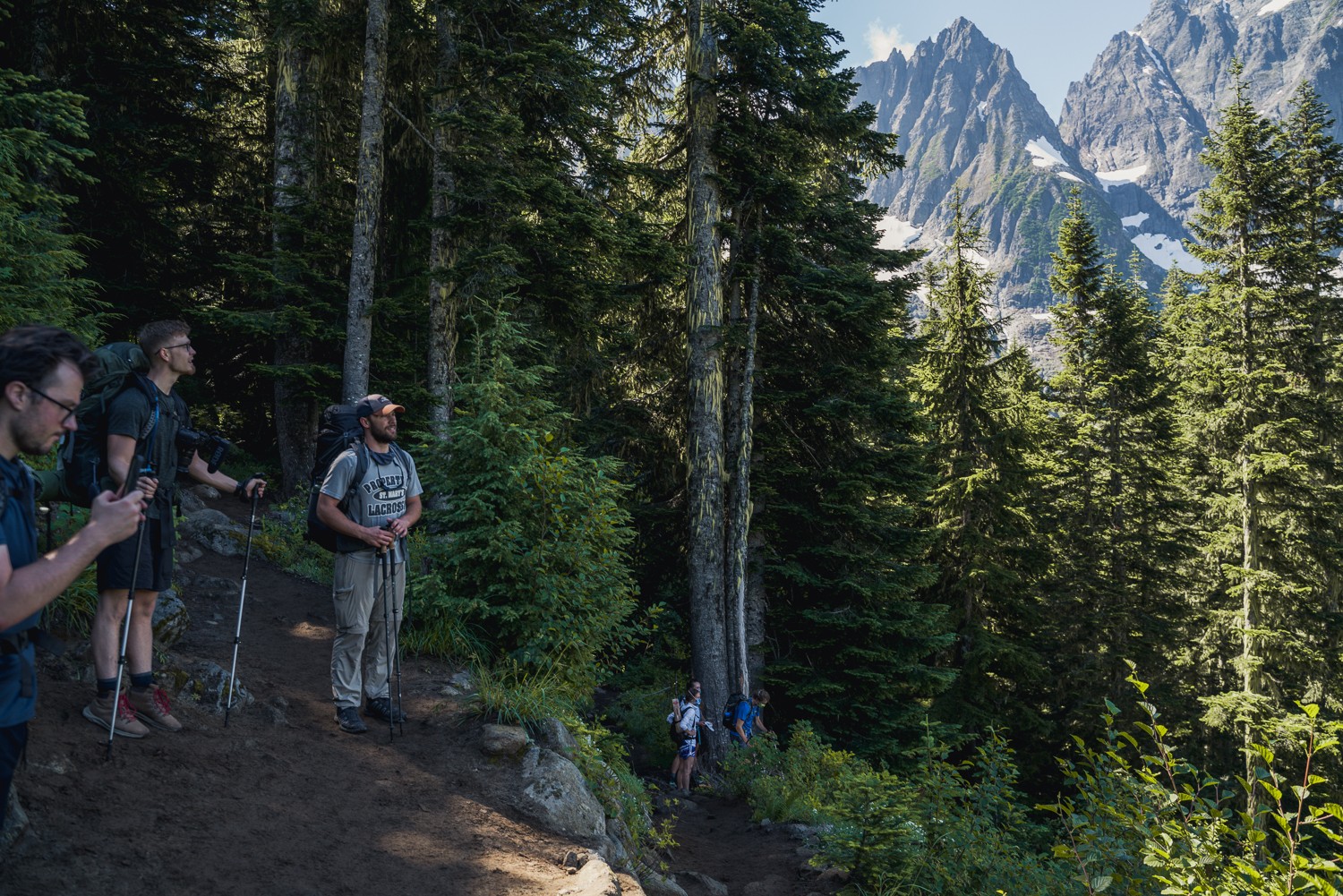 From the end of the switchback section to the Sahale trail merge was a little under a mile and only about 200 feet of elevation gain. We passed a few small streams in this section and took some time to filter water. You’ll definitely want to tank up here, because we didn’t run across any more water until the bottom of the rock scramble section in the final half mile. (There was also water at the top near our campsite.)

The trail merge to hop off the Cascade Pass trail onto the Sahale Arm trail is a great stop to have lunch, overlooking the valley. Additionally if you continue another mile, there’s another awesome lunch spot overlooking Doubtful Lake. 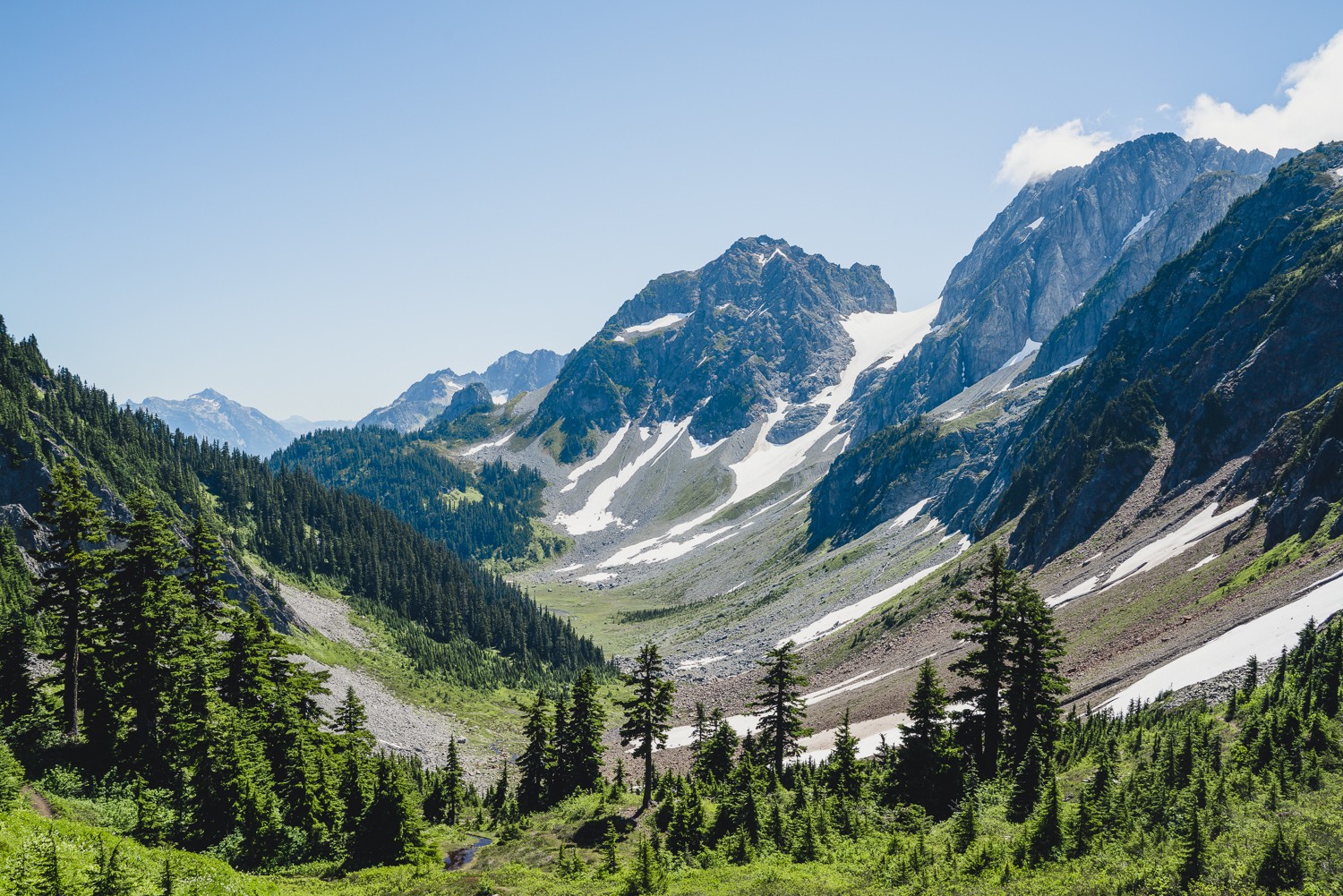 The Sahale Arm trail is about 2.15 miles with 2200 feet of elevation gain that gradually gets steeper and steeper as you work your way up to the campsites. Luckily, the maximum elevation of this hike is 7600’, so there’s not too much of a lack of oxygen.

On our way to the top we saw our first mountain goat! A major bucket list item on this trip for me was seeing one of these guys in the wild. And we saw a lot more as we climbed higher. 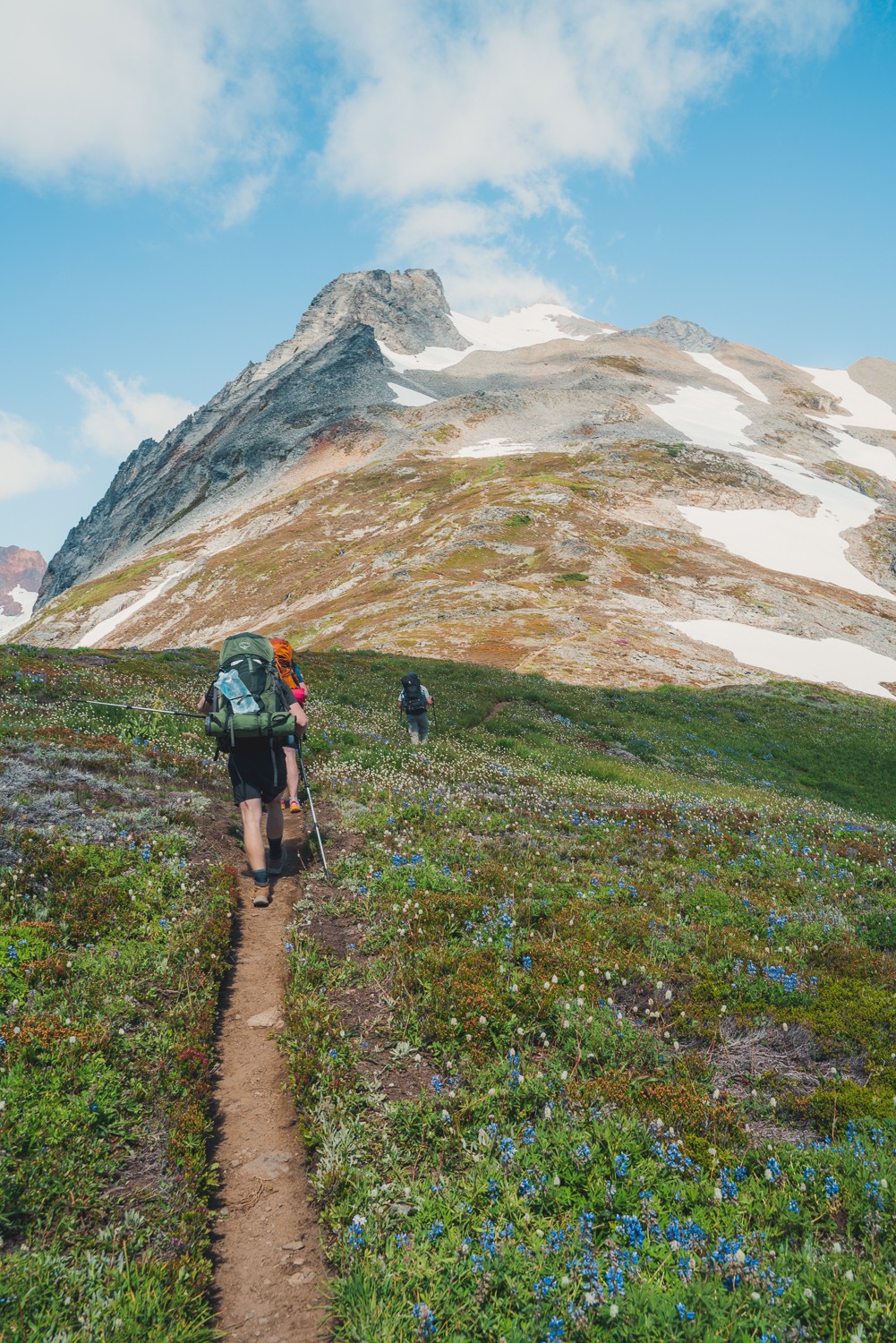 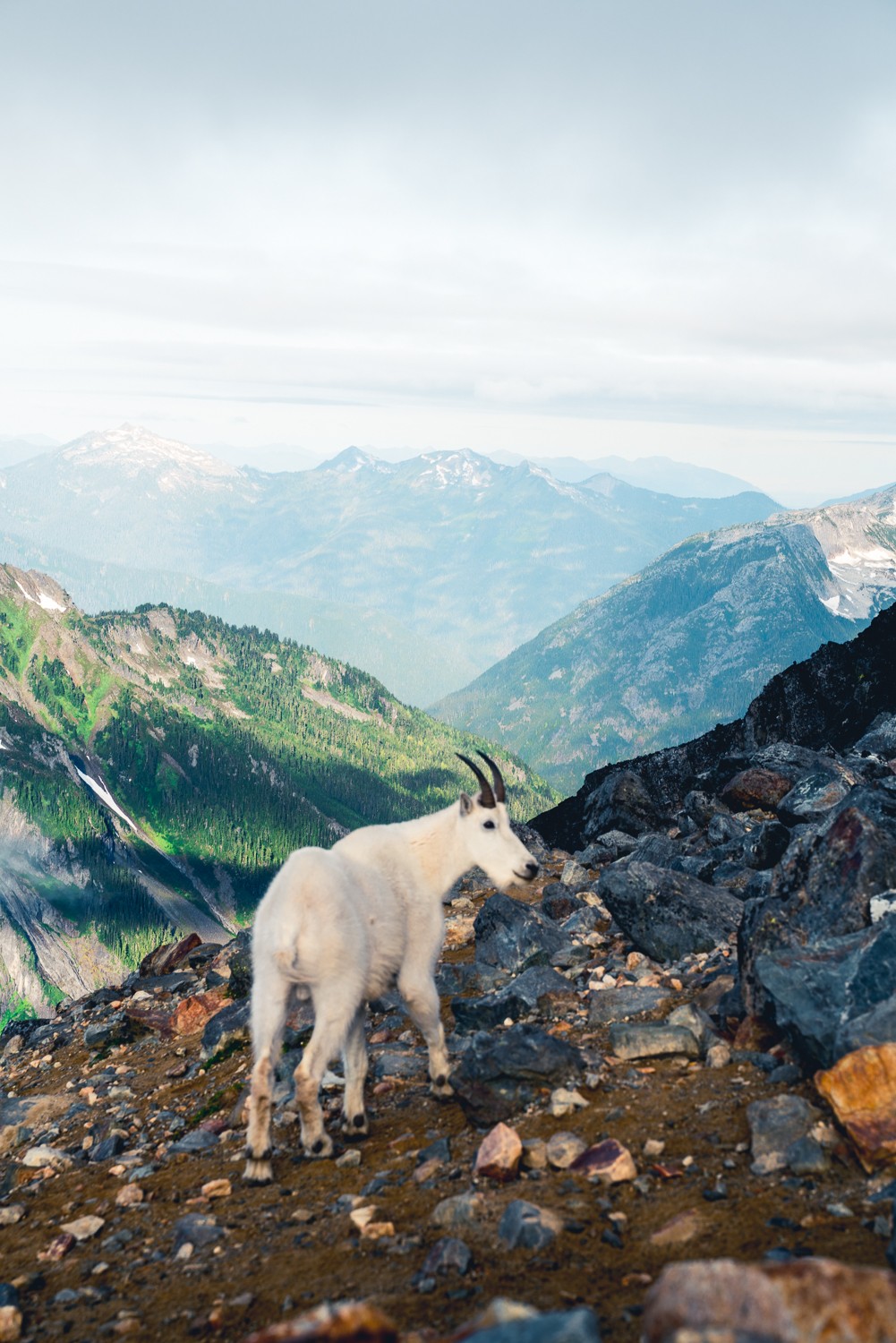 The final 0.65 miles is a rock scramble and by far the hardest section of the hike with over 1000 feet of elevation gain. The trail disappears frequently in the rock scramble but there are plenty of cairns to follow. This section is even more difficult on the way down, so take your time. 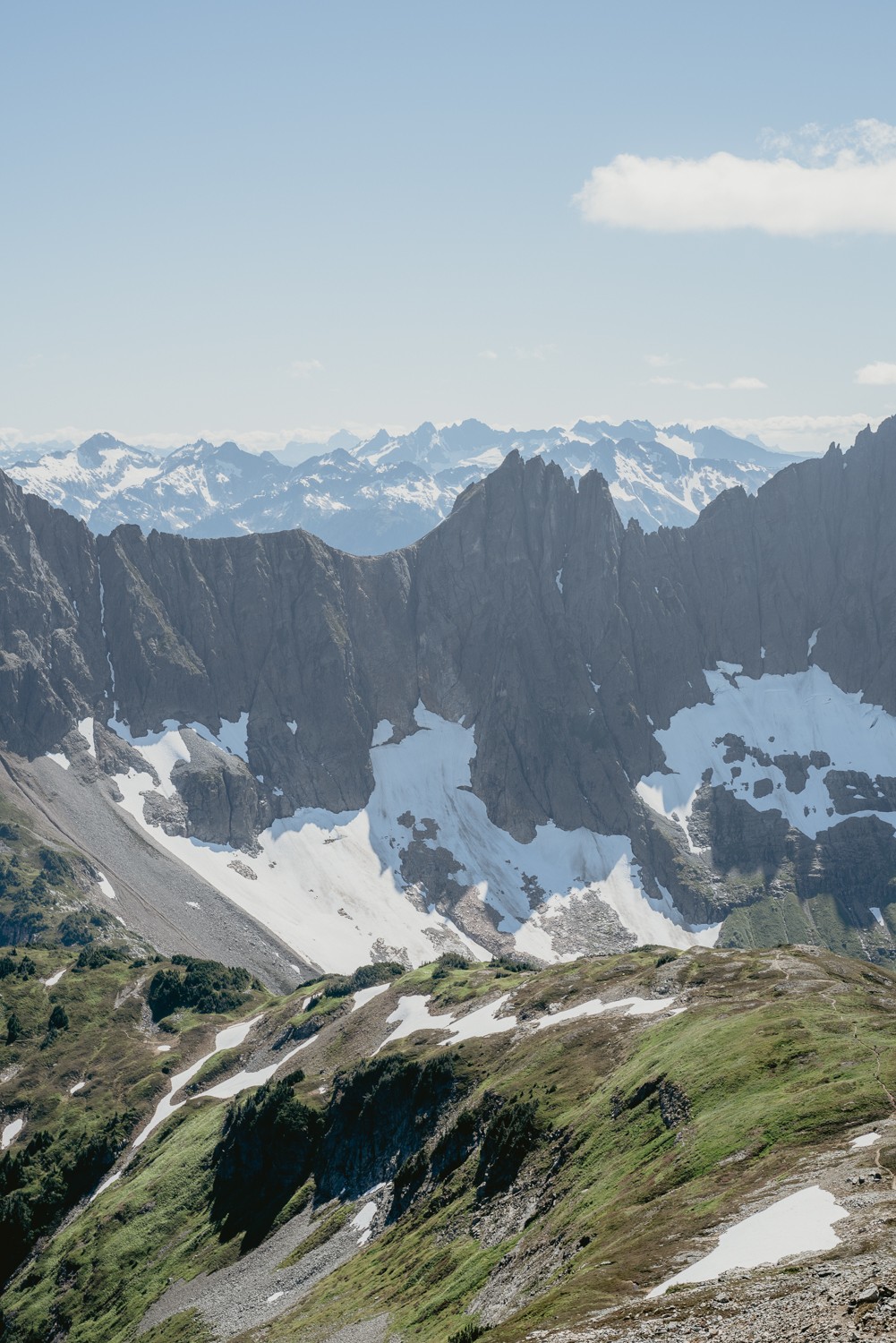 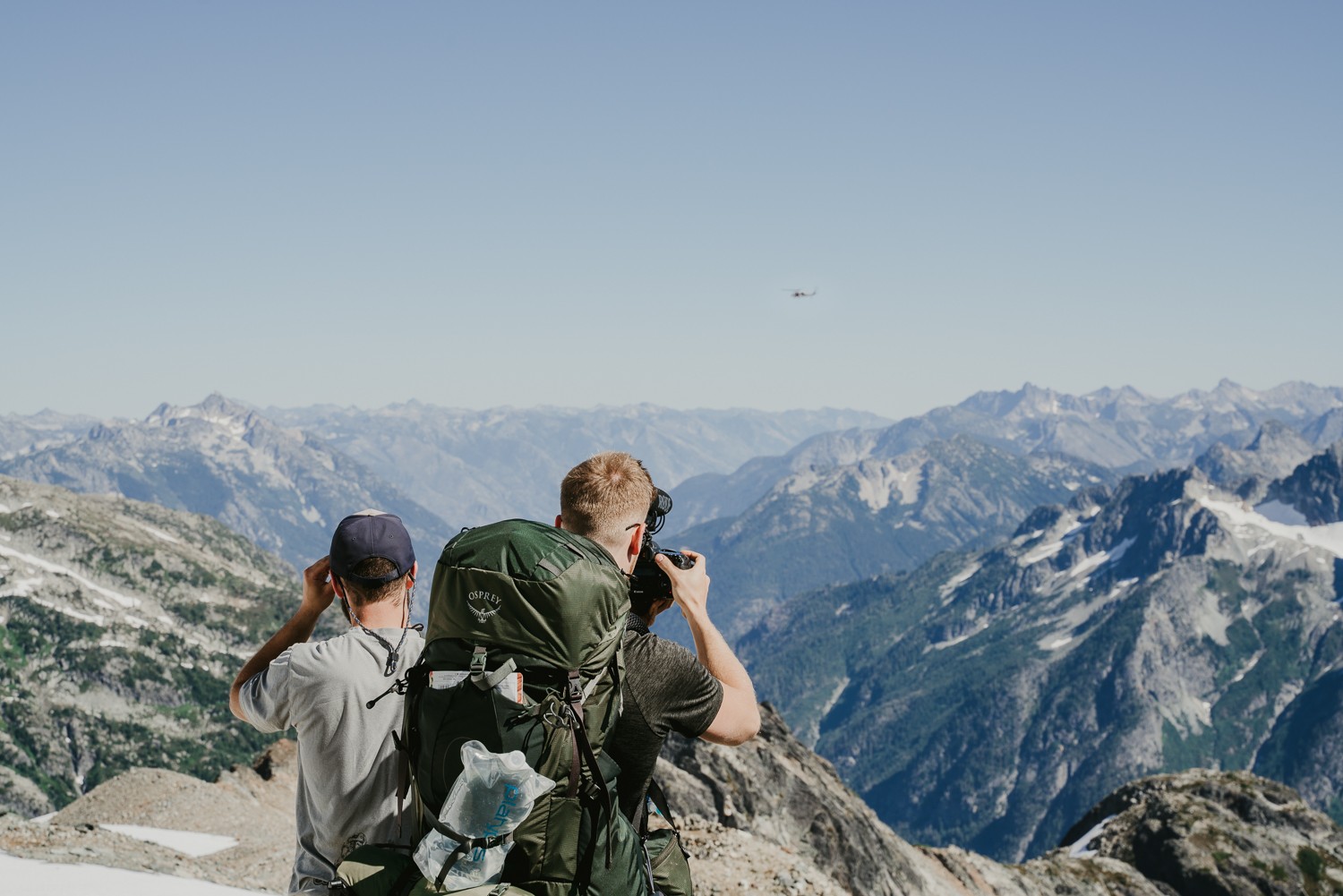 At the end of the trail there are several rock mounds where campers can set up. They all have man made rock walls around them to protect from the wind. Another camper told us they’re referred to as ‘bivs’ but nothing popped up on Google when I searched for that?

While we were searching around for which campsite we wanted to claim, a guy came up to us and said he forgot the SD card for his camera and was about to propose to his girlfriend and saw all of us with our camera gear. So we also shot an engagement. Congrats Jason and Angela! 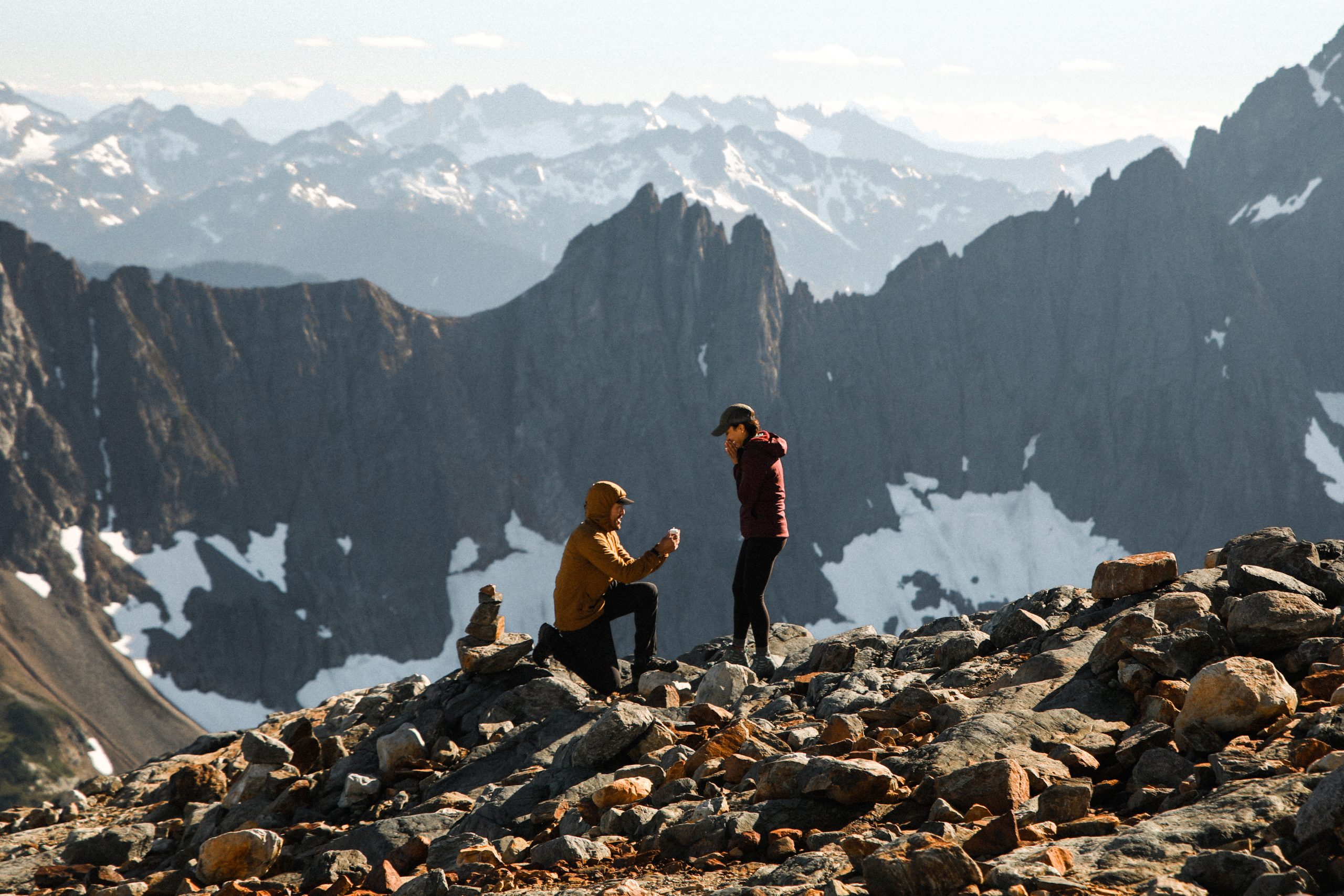 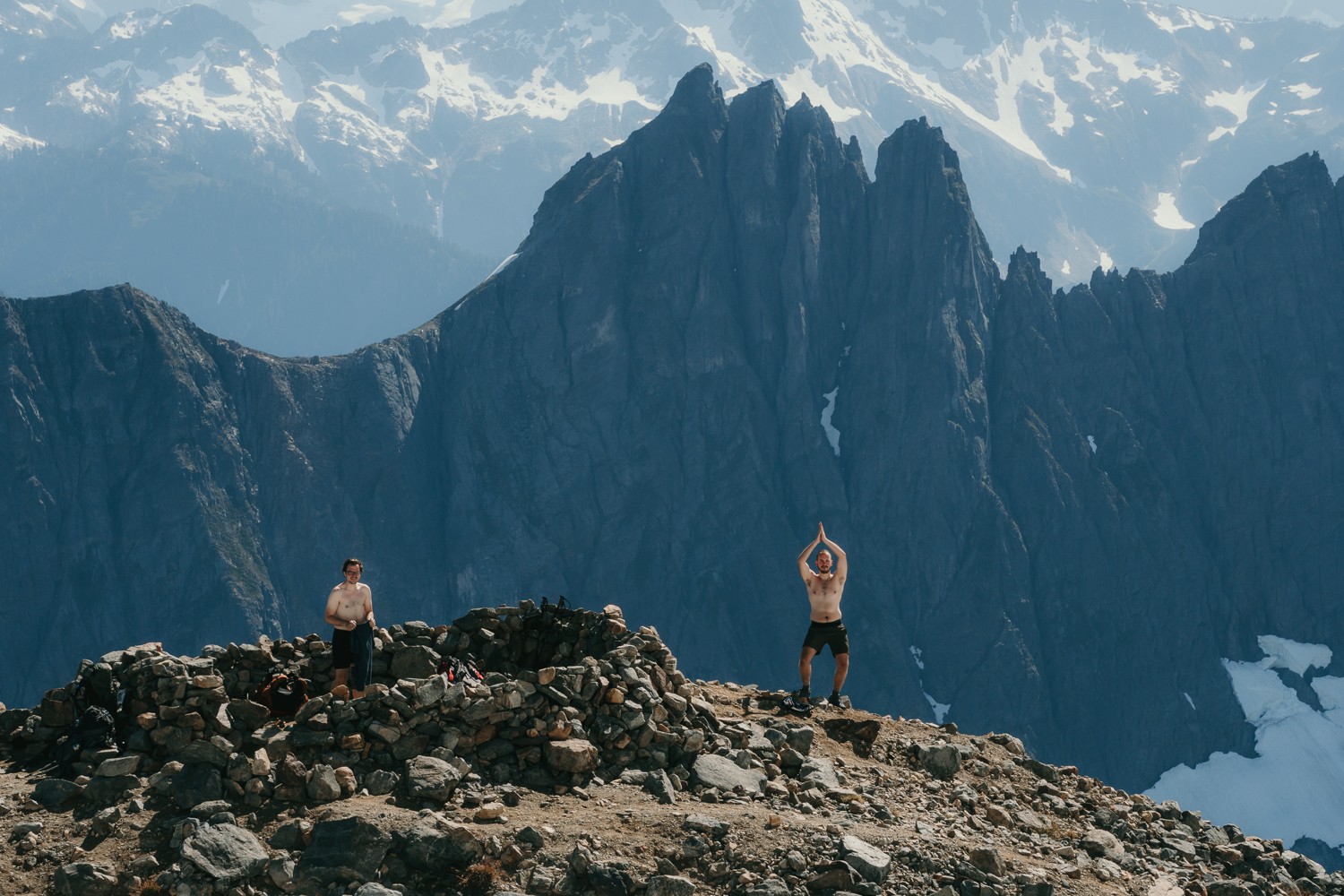 One of the best features of this campsite is the pit toilet where you can take the most epic poop of your life! All 4 of us had to get some funny photos. 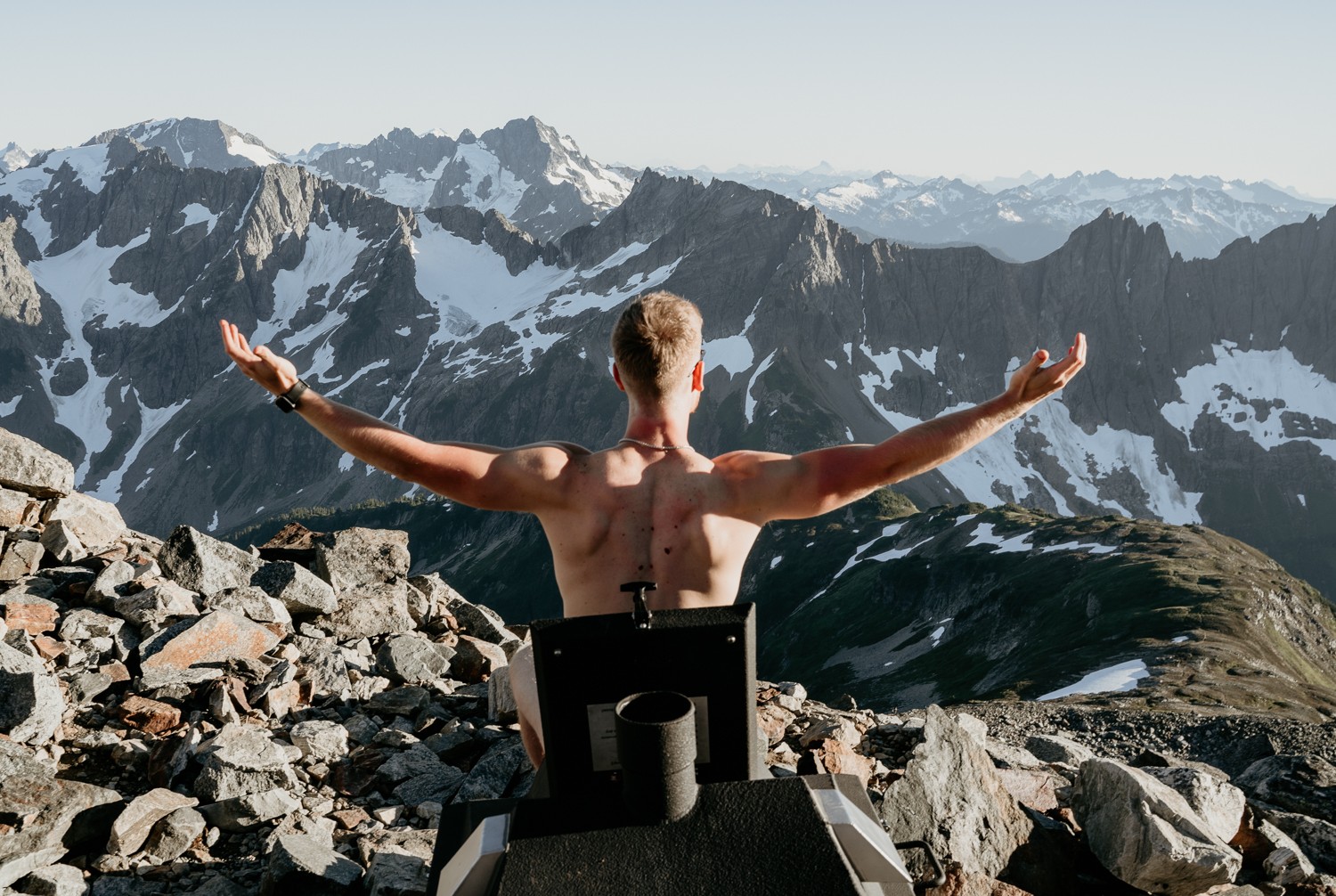 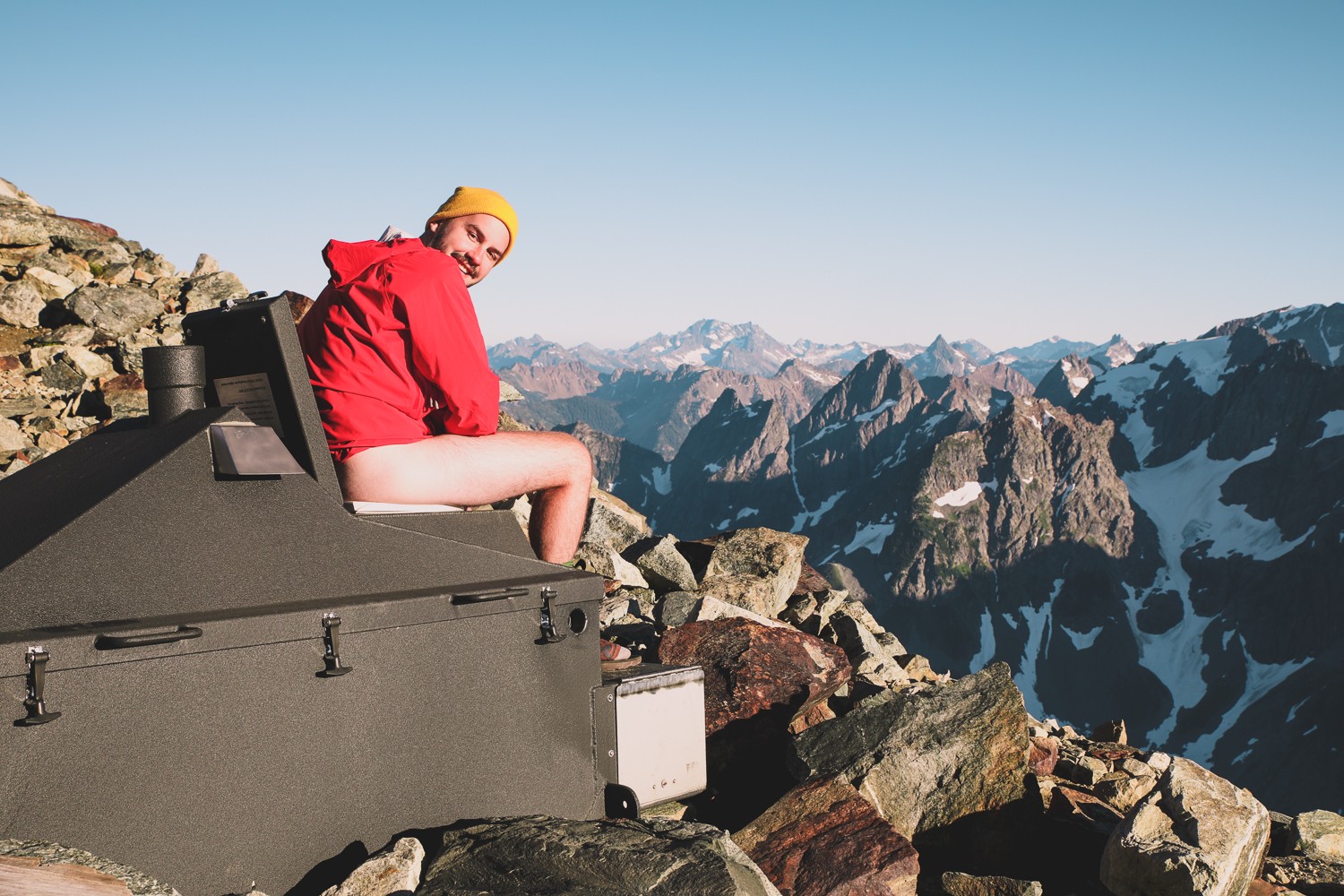 We were gifted with an amazing sunset, which most day hikers don’t get a chance to see. We had some dehydrated Pad Thai with chicken from Backpackers Pantry while we watched the sun go down. For us there was a stream running near us from melting snowpack, so we didn’t even need to melt snow to eat or drink. 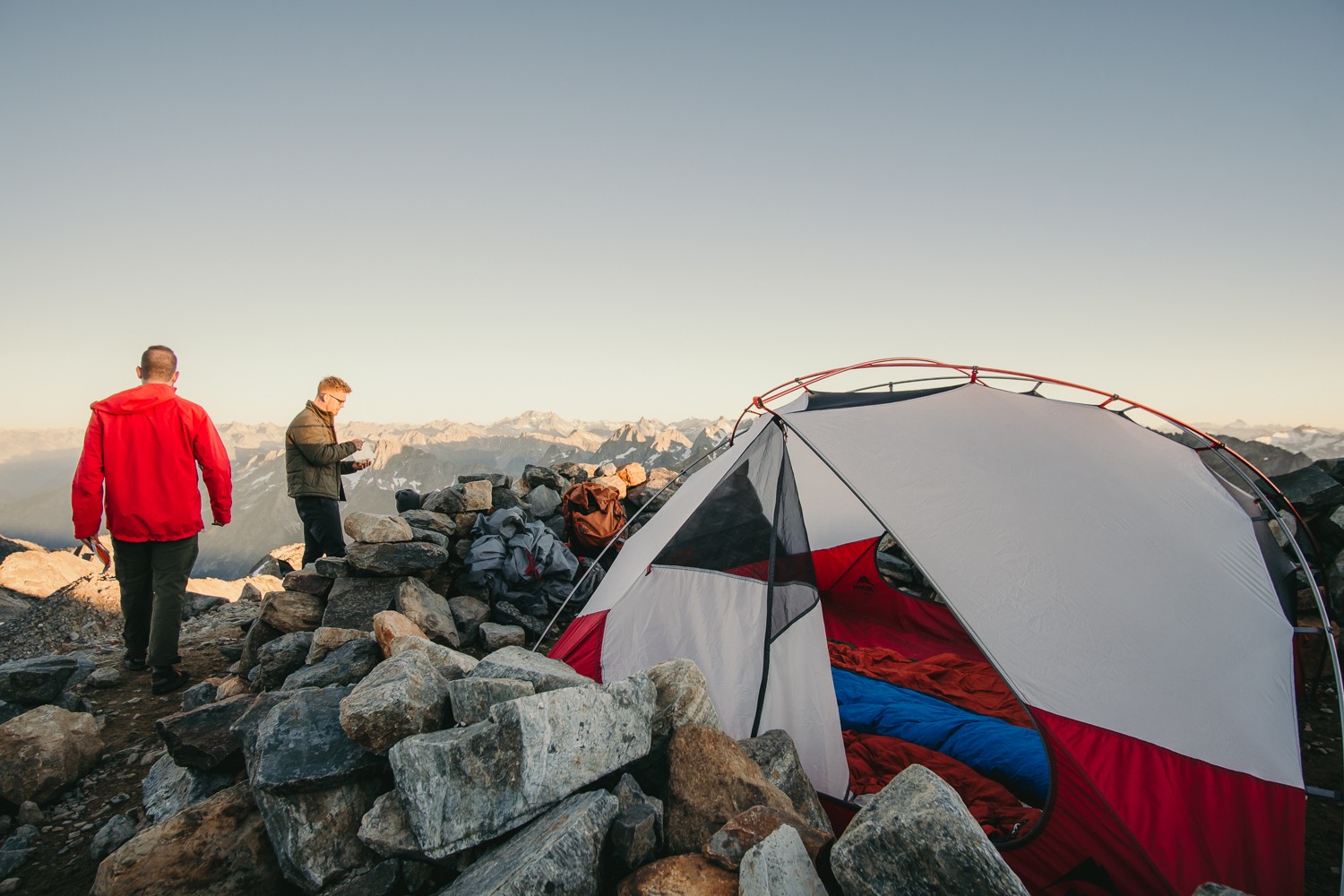 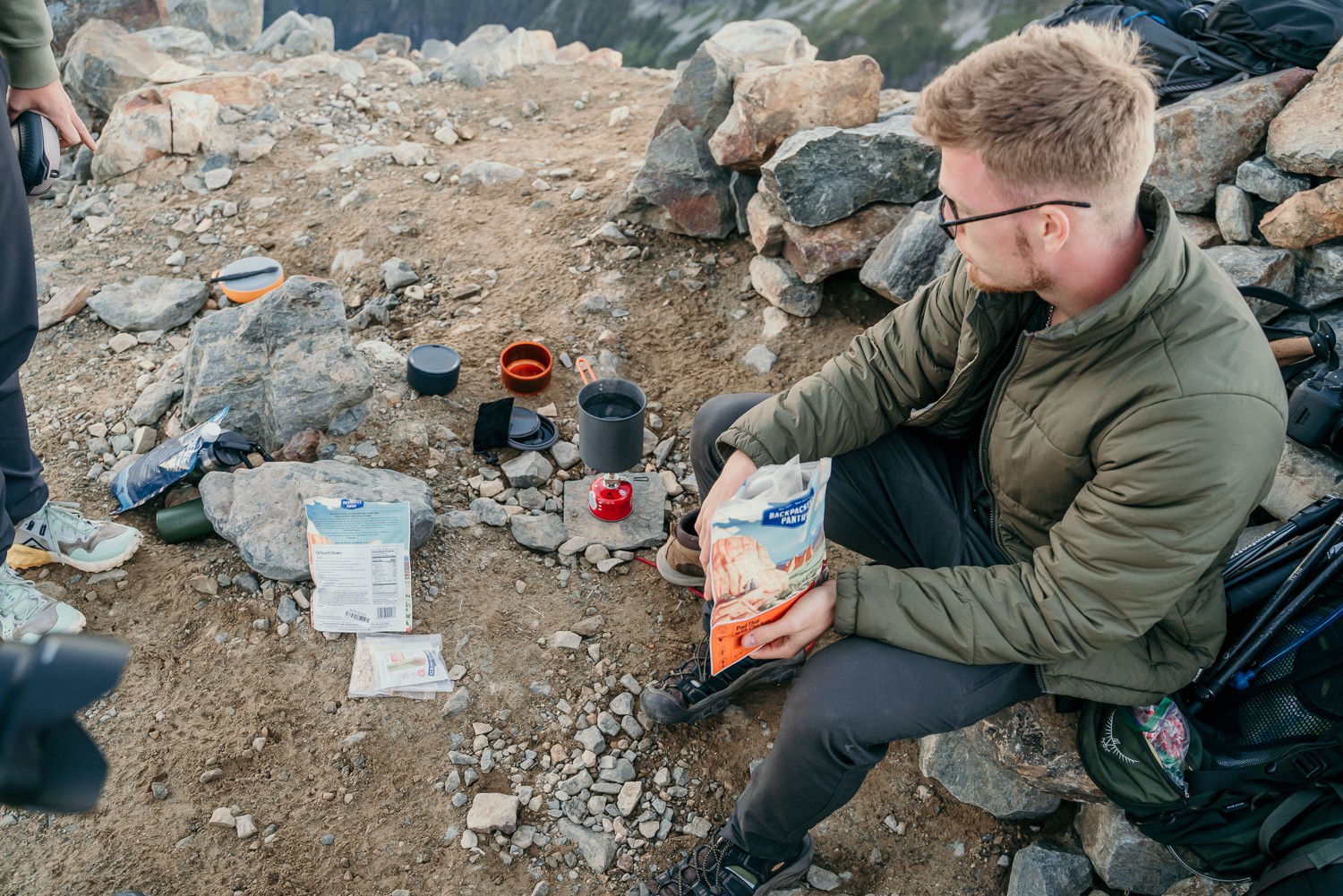 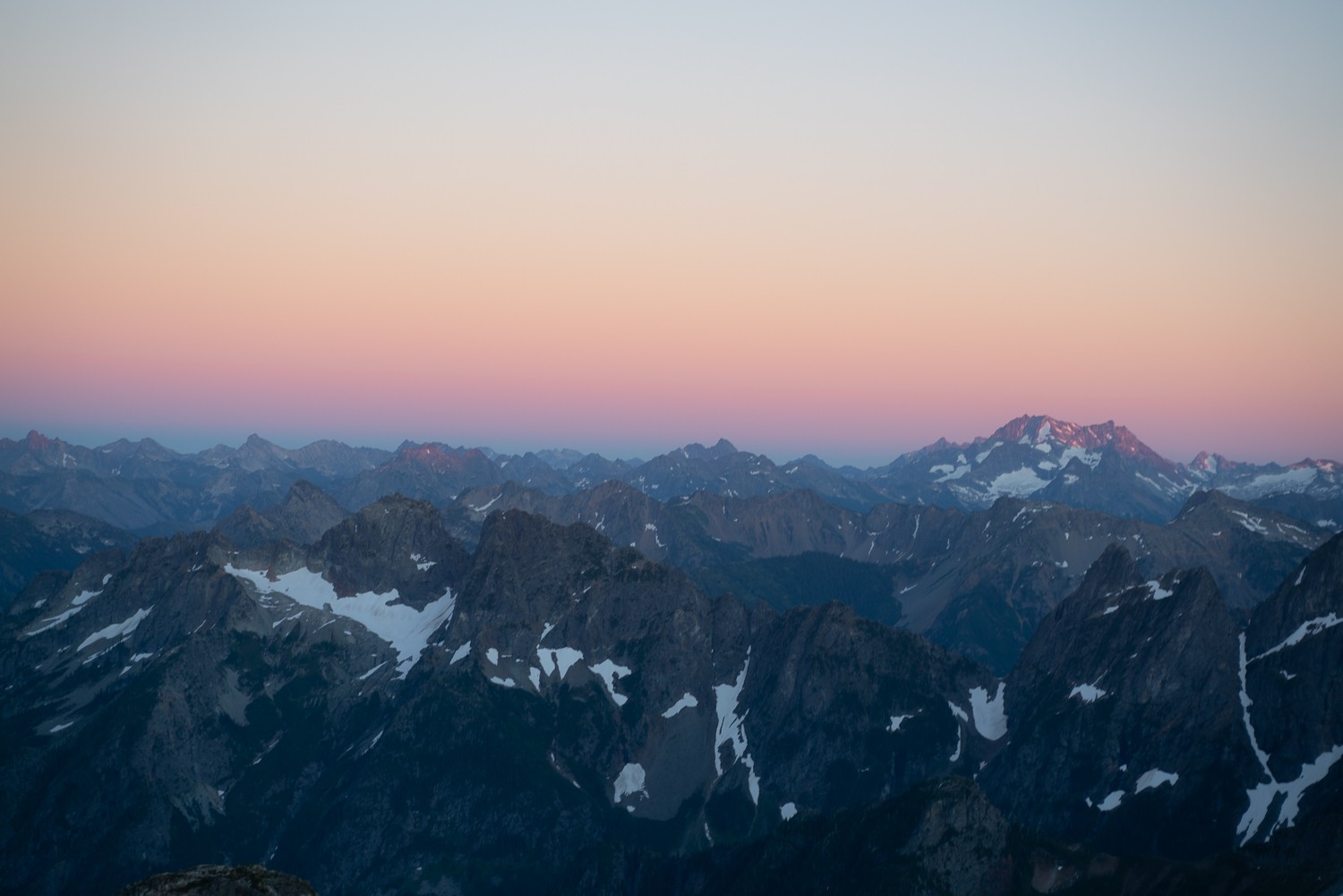 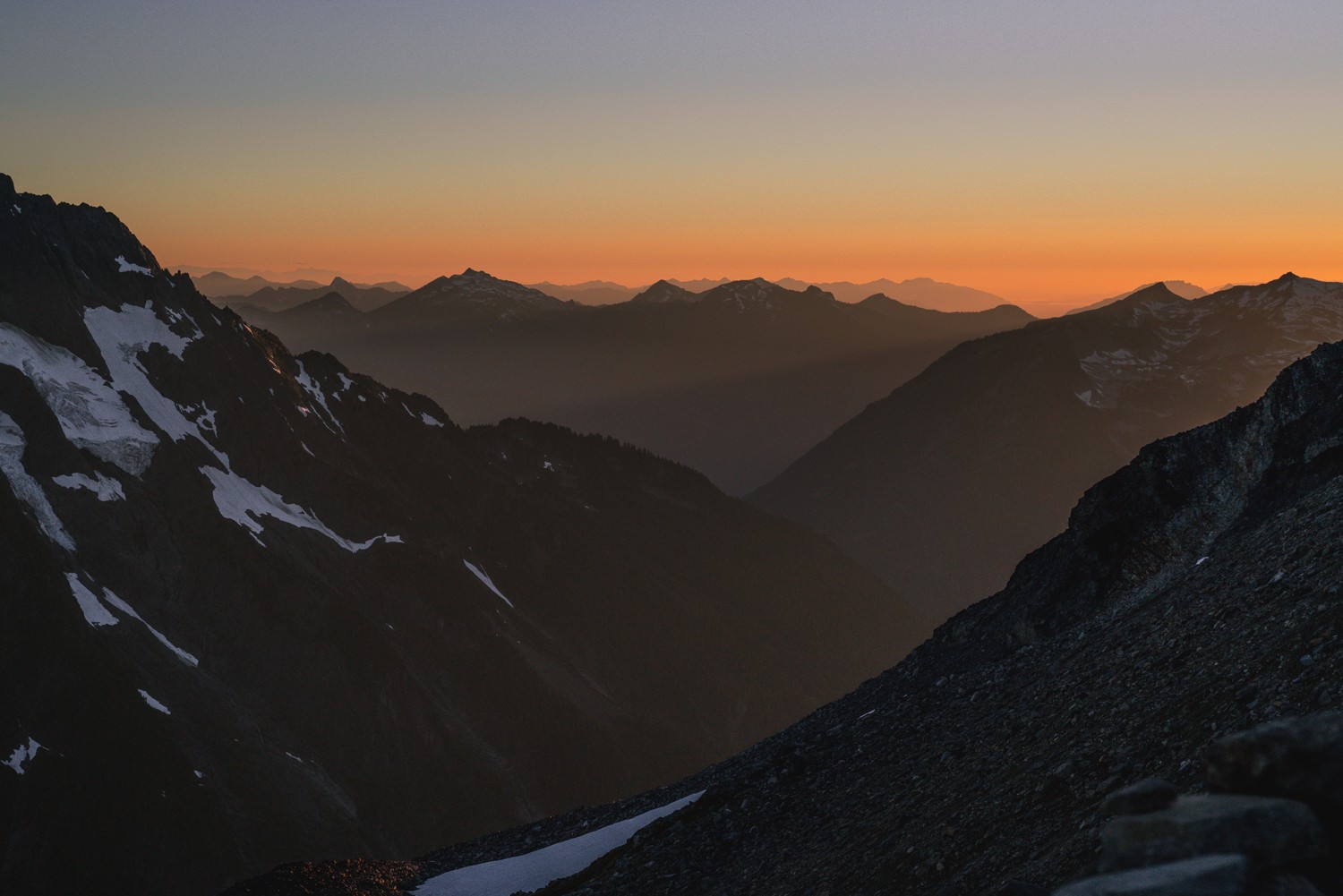 And after the sun finally went down, we had phenomenal Milky Way views! The Perseid meteor shower was also happening so we got lots of pics with shooting stars. This is one of my favorite photo captures of the trip. 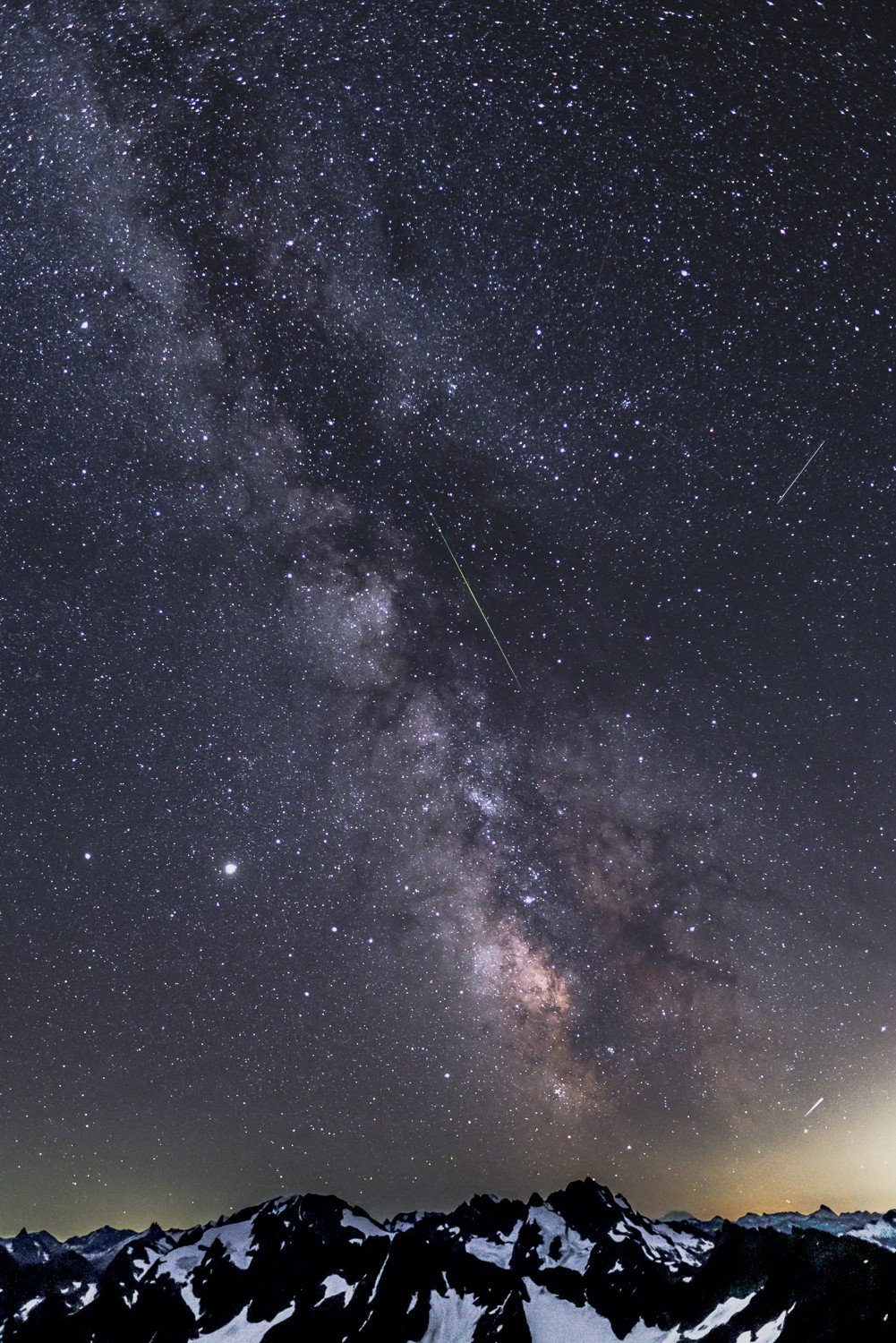 It was surprisingly warm at our campsite, at least according to me. It was noticeably cooler at the bottom of the rock scramble. I guess we had more of a wind block? However, once we got settled into the tent for the night the winds really started picking up. We shared a 4 man tent for this trip. Ian and I faced one direction and Taylor and Wyatt faced the opposite direction. Wyatt and Taylor claimed they were freezing all night but Ian and I weren’t very cold, so that was pretty strange because none of us particularly run hot or cold. None of us slept that well, though, because the wind was so loud and thrashing the tent around.

In the morning, we packed up and headed out on the same trails in reverse. We only had one small section of snowpack hiking to do to get from our campsite back to the main trail, so none of us used our crampons or microspikes. Definitely check with a park ranger to see if you’d need them or not. 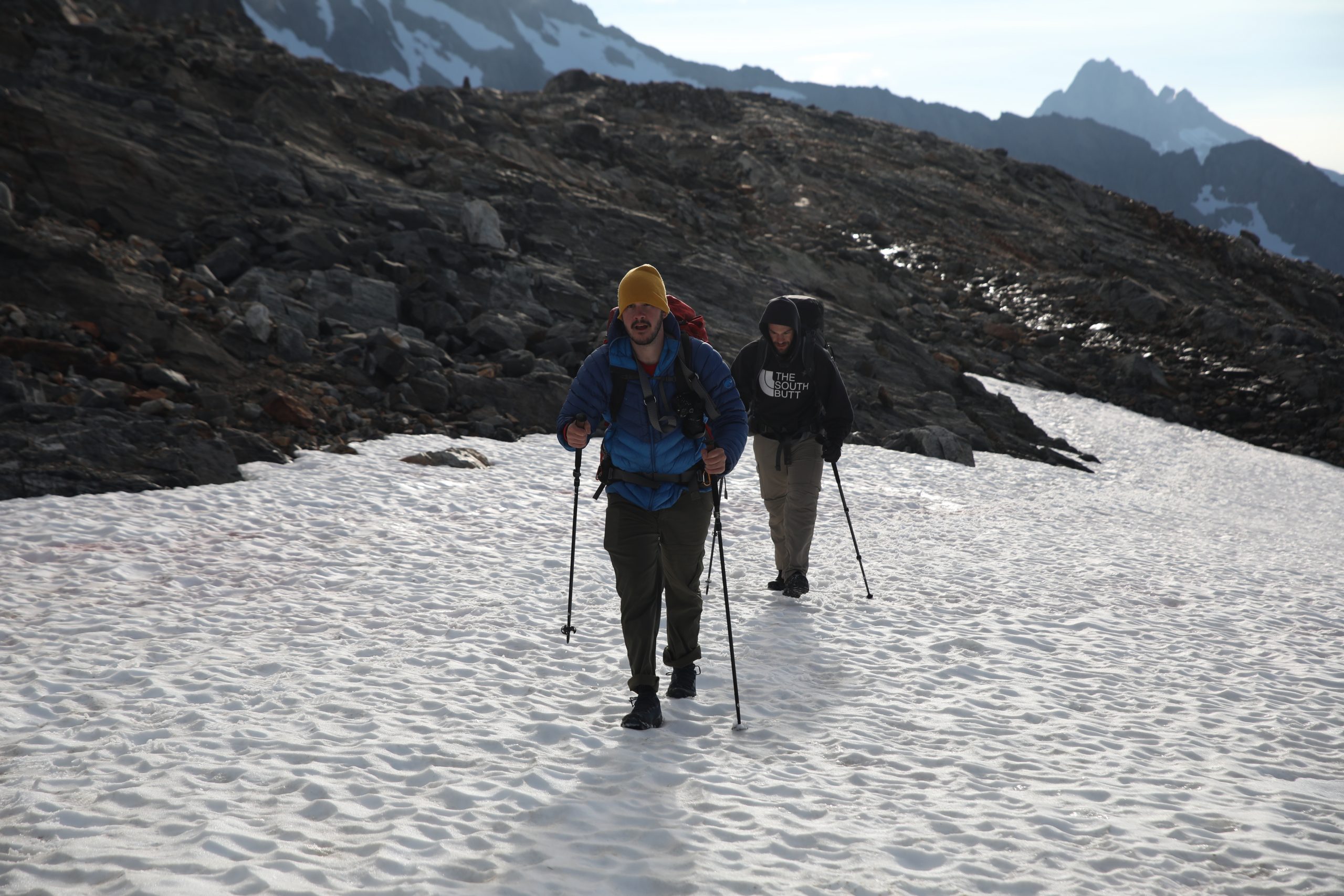 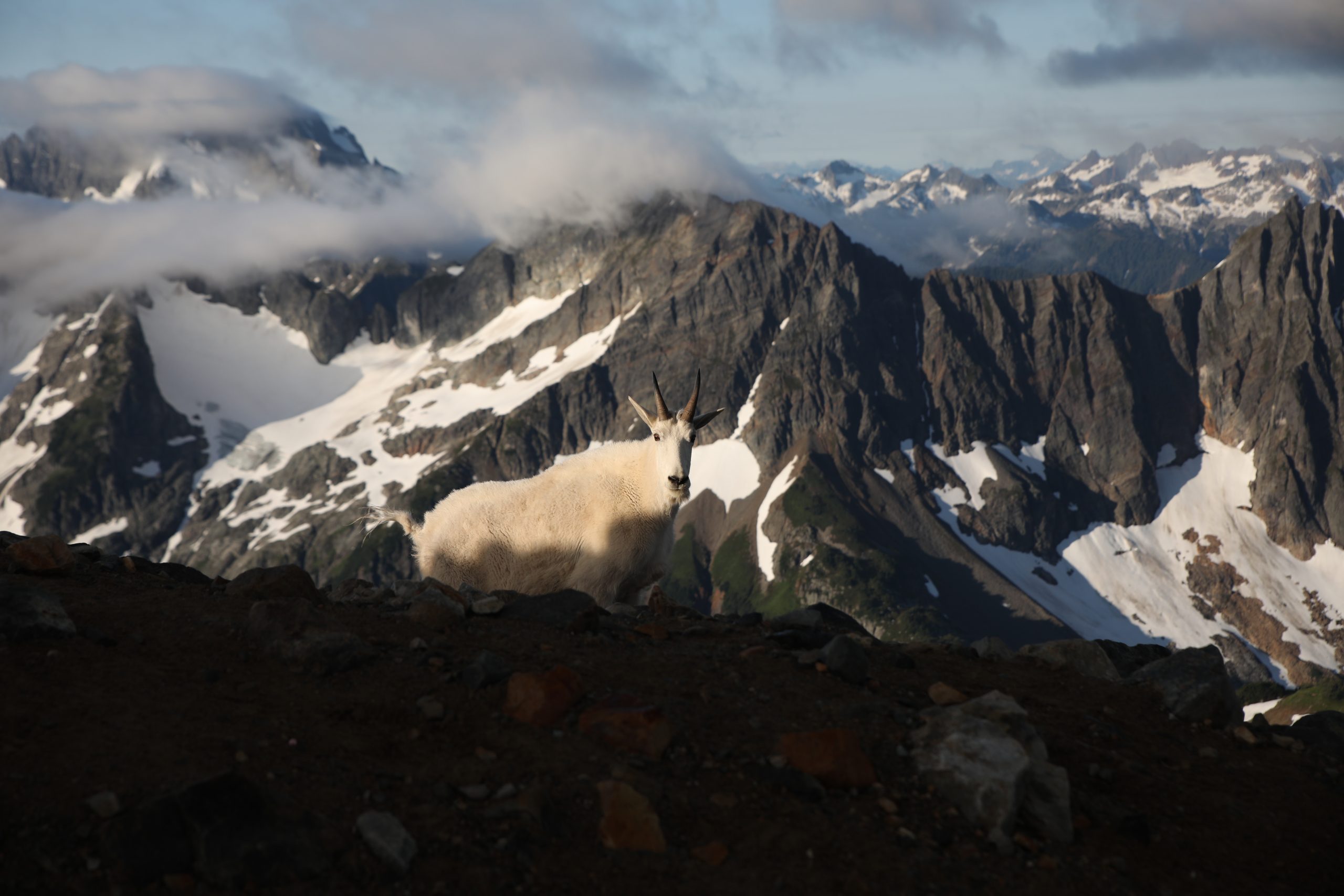 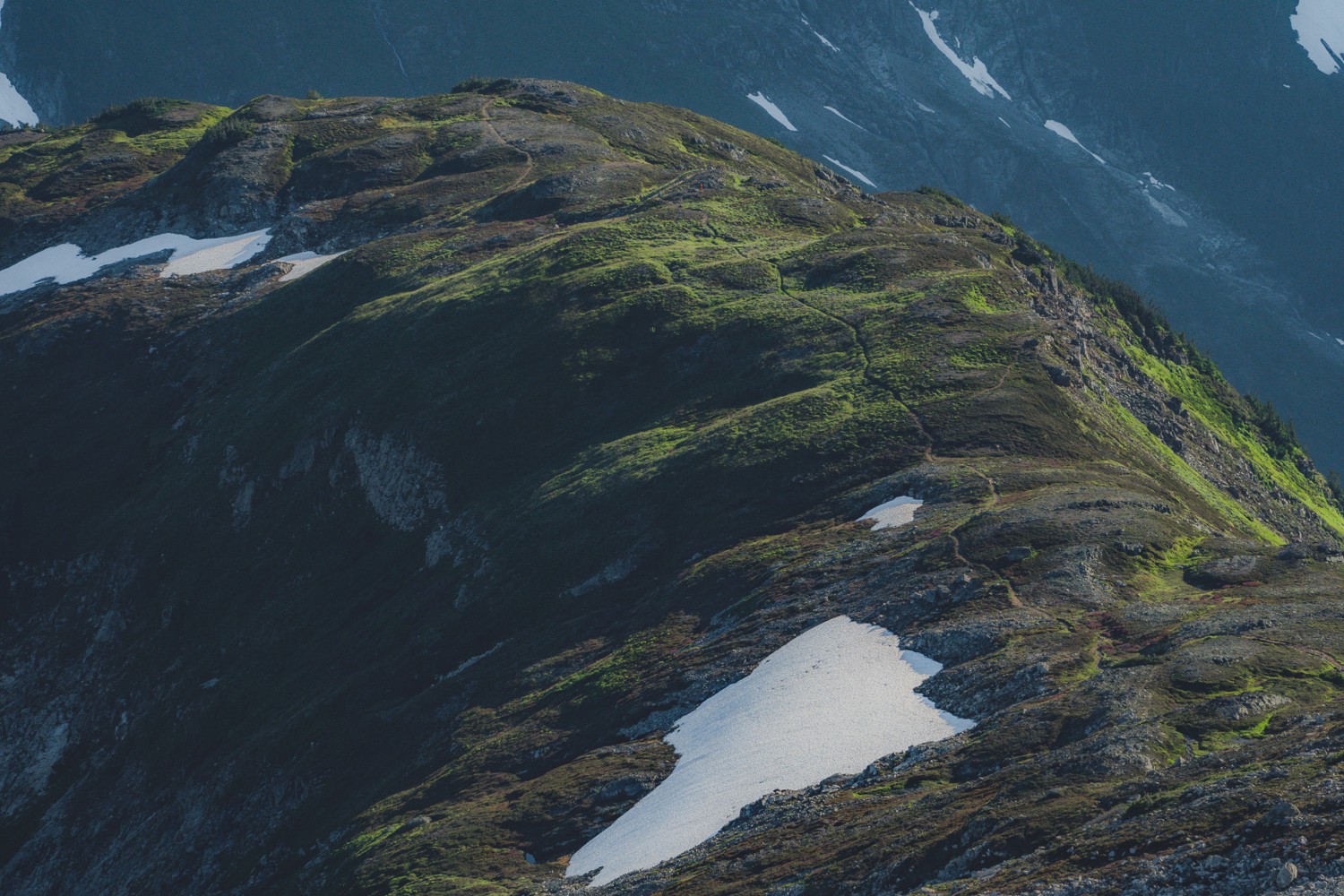 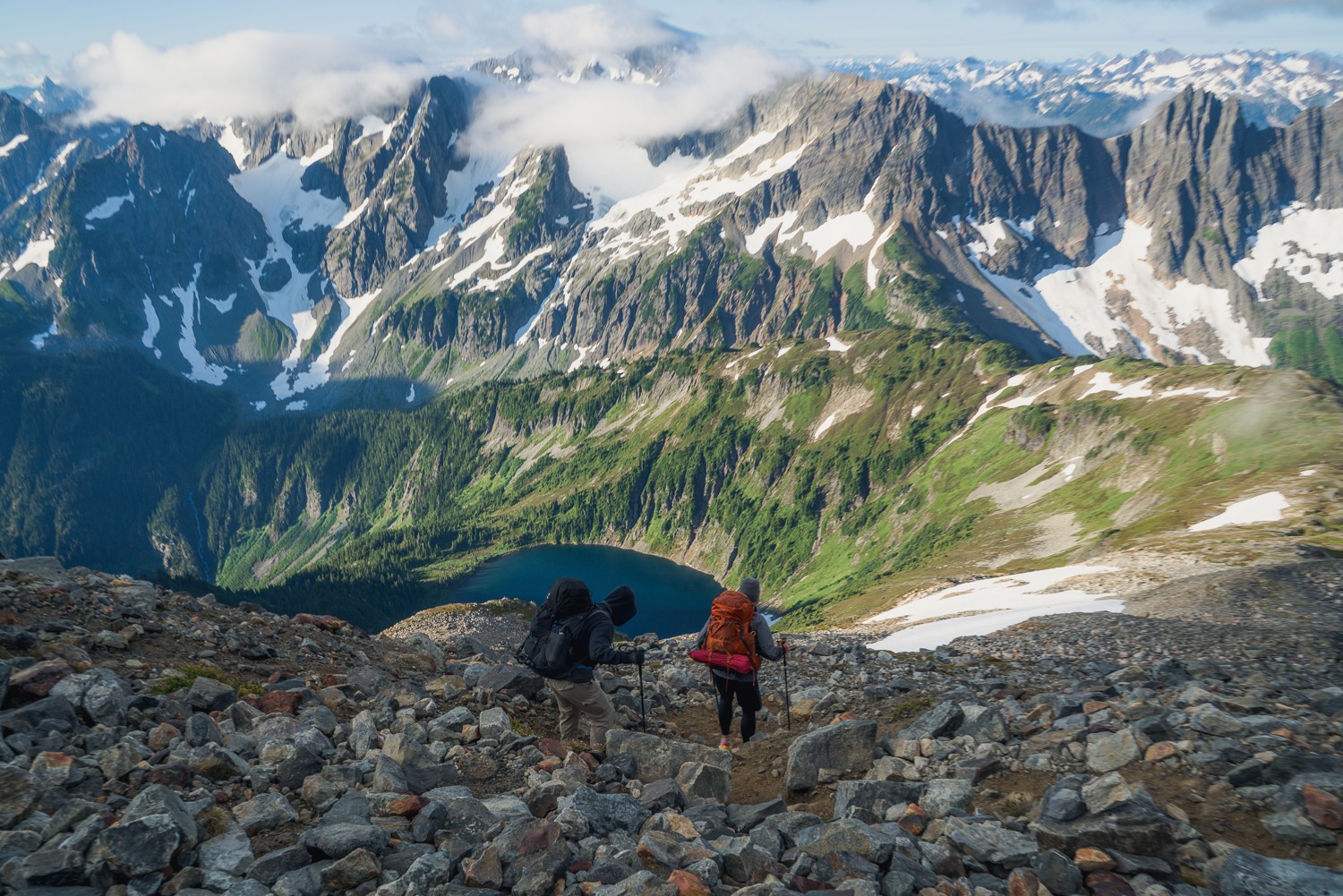 The descent was much faster. We did it in about 2.5 hours vs. around 6 hours for the hike up. The rock scramble wasn’t as bad as I thought it would be while I was hiking up it. To me the worst part of the descent was the switchback section. This section was fine starting the trail because we were all so excited, but on the way down with no views, I just wanted the hike to be over and the 35 switchbacks never seemed to end.

Overall, this backpacking trip was awesome and I’d definitely do it again someday.  Although it’s strenuous, the reward definitely pays off.  It’s very cool to start off seeing the towering mountains from the trailhead and then climb high enough to see endless peaks from the top.

Some additional photos included this blog were from my friends Ian and Taylor.  Please leave a comment below if you have any questions or comments, love hearing from you!

Trizzle is an adventurer, travel blogger and photographer. Click my photo to learn more about me. Thanks for visiting my blog!

Please check you email to confirm you subscription!